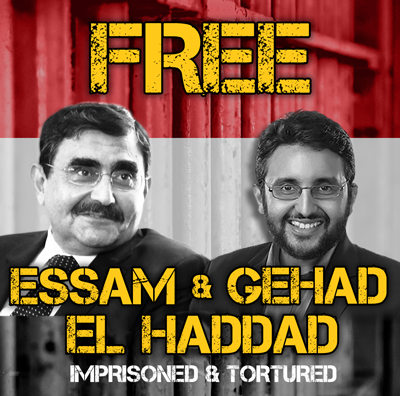 In March 2019 courts actively began Gehad El-Haddad and Dr Essam El-Haddad’s retrial after their charges were nullified by the Court of Cassation in 2016. Today was their verdict.

Gehad was acquitted of all charges. Dr. Essam was acquitted of the charges related to espionage, money laundering, national security and terrorism, but was sentenced to 10 years for a remaining charge of being a member of an illegally registered group.

The family expects Gehad will be released and reunited with his wife and children within the next two weeks. The family urges authorities to uphold the court ruling, refrain from any judicial setbacks, and expedite the administrative release process in order to transfer Gehad to a hospital.

The family stands by Dr. Essam’s innocence. Dr. Essam did not commit any crime, he served his nation with pride, and today’s sentence was a tragedy. His legal team is identifying options to appeal the sentence. After 6 years of detention in solitary confinement, Dr. Essam should have been acquitted. He is nearing 70 years, and his health has deteriorated over the past few years. Given the severe health risks, the family hopes for his release or at least a permanent transfer to a hospital.

Dr Essam has had 4 heart attacks while in prison. Gehad had lost 77 lbs and is unable to move without assistance. Both have been denied urgent medical care.

The #FreeHaddad campaign continues to fight for Gehad and Dr. Essam’s freedom and to reunite them with their families.