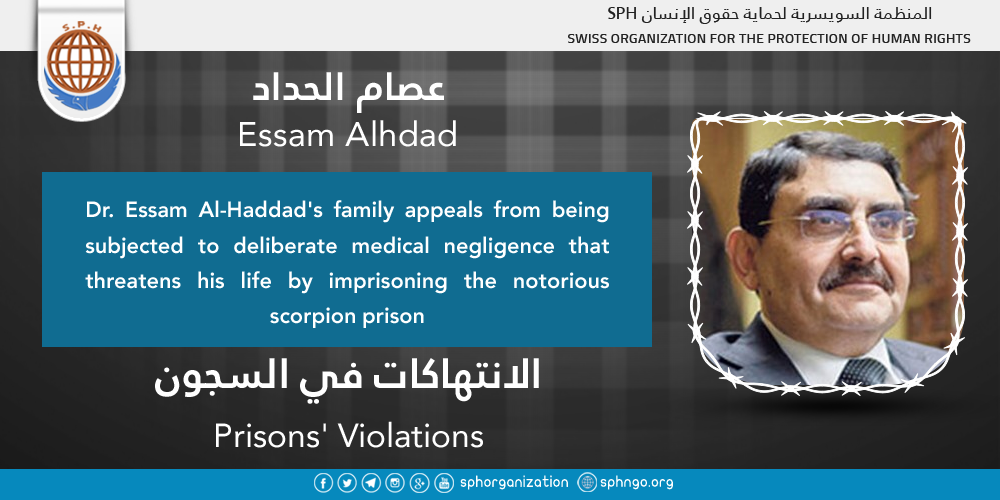 The organization has received an appeal message from the family of the Egyptian citizen/ Essam El Haddad, 65 years old, doctor stating that he is facing deliberate medical negligence inside his imprisonment at Scorpion prison (notorious)

He is a former Assistant to the President of the Republic / Mohammed Morsi, and holds a Bachelor of Medicine of  Alexandria University, Department of Medical Analysis, and has a MBA, is married and has 5 sons

We publish the text of his wife’s message

“My husband Essam El Haddad was transferred to the prison hospital on Wednesday, on Thursday I tried to visit him or to know anything about him but they refused, they also refused to enter him any medicine or safety deposit

My husband is prevented from visit since a year and half, he was subjected to heart attacks since 15 October 2016 and haven’t been presented to a Cardiologist so far!!  by order of the judge and with great difficulty a scan of the heart was made and shows the need for cardiac catheterization and the installation of supports in the arteries of the heart in September 2017 after a whole year of suffering !!
He entered a total hunger strike in last November, the judge ordered to quick undergo the surgery, they asked for a full payment in advance for a heart catheter and for the installation of two supports.. this was two months ago and so far my husband did not undergo the surgery or even examined by a cardiologist

My husband messaged me rasking me to go to a cardiologist to write him a medicine as his health is deterioration and they refuse to help him by anyway
I do not know any details about his health condition, the simplest level of hypertension and refuse to give us a report on his condition or allow him or us to see the results of any tests conducted for him !!
I have already contacted a cardiologist … but he refused to write a treatment because his primary treatment is the quick catheterization Otherwise, his condition will deteriorate, especially in the conditions of infertility in the Scorpion where he has not seen the sun for more than a year and without any health food with severe psychological pressure and prevent the visit him .. Besides the humidity and cold in the cells!
I sent him a group of drugs that deal with heart attacks with visits to other detainees with him in the amber because he is forbidden to visit a year and a half ago, and have written on each drug his name and his cell so as not to steal drugs and resale .. Of every 10 strips, He had only one or more bars
Recently we knew that written names are being erased and drugs sold to a pharmacy close to the prison
!!
Not only deprived them of any medical care and falsification of the results of important analyzes and exposure to all forms of pollution and sources of infection in water and corrupt food and refused to perform tests or operations of critical cases such as the case of my husband, after that they steal the medicines heart and hypertension medicines!!

They used all means to slowly kill them in Scorpion prison
O Ministry of Interior, Dr Essam El Hadda (65 years old) need an urgent catheterization since a year and half
The postponement of the operation is deliberate in the hope of further deterioration of his condition ..
Failure to present him to any cardiologist despite having 4 heart attacks in his solitary cell does not mean to seek to kill him !!
You are the responsible for the current deterioration of his health
Should he start a new hunger and medicine strike as he did 3 months ago to have the surgery?
When torture, starvation and solitary confinement did not succeed in political extortion, the threat of medical death by preventing treatment and medication became one of their most important means
What do we say about a frightened regime trembling fragile afraid to come out of a speech of his opponents held in the graves alone underground for 5 years!

The organization condemns violations committed against Egyptian detainees inside Egyptian prisons, through the organization; his relatives implore concerned authorities to intervene to stop violations against him, his family demands that he receive urgent health care, and his family hold the prison administration and the head of the prison authority responsibility for his safety.